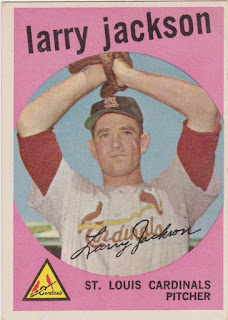 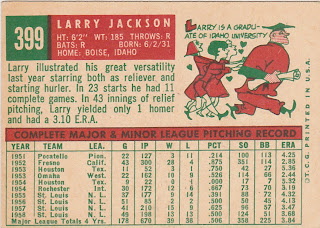 Take a peek at Larry Jackson's numbers and I'll bet you will say something along the lines of  "He was pretty good, why don't I know anything about him?"

And he was pretty good. He won 194 major league games, made the All Star team four times and finished second in Cy Young voting in 1964. And those were the days of just one Cy Young Award. Had there been one for each league Jackson would have grabbed the NL version. According to Wikipedia "his 194 career NL victories are the most in the league since 1900 by any right-hander who never played for a first-place team".

Jackson was signed by the Cardinals in 1951 out of Boise State. He spent four seasons in their talent-rich system, including a 1952 campaign in Class C Fresno where he won 28 games! He made the Cardinals starting rotation in 1955, spent the '56 season in the bullpen and then returned to the rotation for good. He put up double digit wins every year from '56 through the end of his career in 1968 with the Phils.

In April of 1966 he was involved in the trade that sent Fergie Jenkins from the Phils to the Cubs. In 1968 he was drafted from the Phils by the expansion Expos but decided to retire rather than toil for the fledgling club.

It's one of those pink framed jobs! And in pretty nice shape, too.
Posted by Commishbob at 6:30 AM