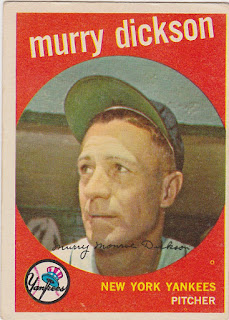 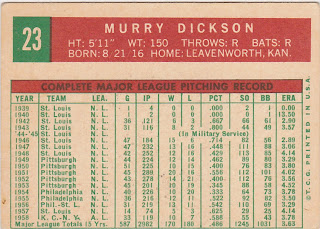 I have absolutely no memories of Murry Dickson, as a Yankee pitcher (he only pitched six games for them) or otherwise. But he pitched for a long time, and generally very well. He won 172 games against 181 losses but he had a career 3.62 ERA. And he did that while spending several seasons with some bad Pirate and Athletics clubs. He picked up two World Series rings, btw.

Rather than re-invent the wheel I'm just going to urge you to check out the Murry Dickson bio at the terrific Baseball In Wartime site published by Gary Bedingfield. He tells a great story and there is no way I could do it justice with a summary.

His page at SABR is pretty good reading as well.

Enjoy the card and check Ol' Murry's story. Hey, you have to have something going for you to lead the league in losses and yet make the All Star squad as Dickson did in 1953.

Murry has his cap tilted up, well I've got mine off to him.
Posted by Commishbob at 7:53 AM