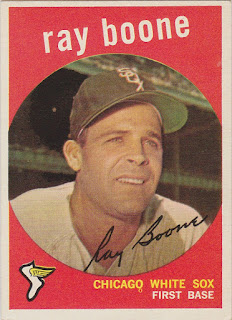 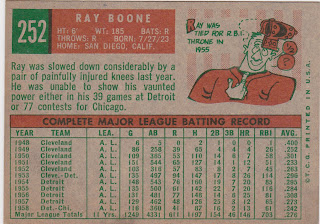 Jeez, I knew the Boone family was a big baseball family but I don't think I realized just how true that was. Ray Boone is the father of big leaguer Bob Boone and Rod Boone who played minor league ball and the grandfather of Brett, Aaron and Matt Boone. Matt played only in the low minors.

Grandpa Ray, seen here rocking that natty S-O-X cap I love so much, signed with the Indians as a catcher in 1942, played a season in the minors and then served three years in the service before coming back to baseball. The Indians converted him to an infielder and by late 1948 he was in the bigs. In fact the Indians had him on their World Series roster that year and he got one at bat (and a ring I'm assuming). He hit .301 in 1950 but by 1953 he had been traded to the Tigers. His career took off in Detroit and with much improved hitting numbers (and a move to third base) he made a couple of All Star squads.

Traded to Chicago in 1958 his career wound down quickly and he played first base for a number of clubs in 1959 and 1960 before retiring. He went on to a long run as a scout for the Red Sox.

The Boone clan can boast about being the only three generation baseball family with each generation having played in an All Star Game, a World Series and having 100+ career dingers. Take that one to your next party and stump everyone.
Posted by Commishbob at 5:49 PM