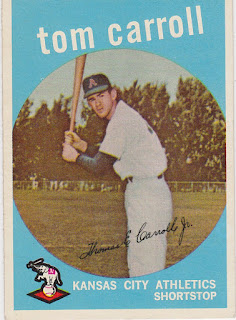 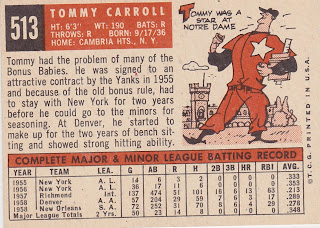 Tom (or Tommy) Carroll was caught up in the '50s Bonus Baby rule that required the team, in this case the Yankees, to keep him on the active roster for two seasons. I guess someone thought that was a good idea at the time.

Anyway, shortstop Tom Carroll came out of Notre Dame and straight to the Yanks in 1955 and proceeded to sit on the bench with two AL champion Yankee clubs. He did more pinch running than anything else. He managed to bat .348 for the Bombers in 23 at bats total. In the '55 World Series he entered two games as a pinch runner. In the 1956 Series he never left the bench but he did get a ring.

As with many of these 'bonus babies' the two years he spent spitting sunflower seeds in major league dugouts didn't do much to further his development. Back in the minors in 1957 and 1958 he had mediocre numbers and his fielding was pretty poor as well. Traded to the A's in 1959 he played in 14 games but spent much of that year and all of 1960 in the minors. He retired after that.

After his playing days Carroll went to work in the U.S. State Department and saw duty in several countries in Latin America. He is apparently no relation to the Tom Carroll who pitched for the Reds in the mid 70s.

This high number late series card shows Carroll in an airbrushed A's cap wearing what appears to be a Yankee uniform. One can barely make out the pinstripes when the view of the card is large enough. So many Yankees and Athletics players shuffled back and forth in that era that it's a wonder the Topps photographers didn't just carry the other team's cap when photographing either club's players. "Here ya go, Carroll, put this on and we'll take a few more pics, just in case."
Posted by Commishbob at 7:00 AM