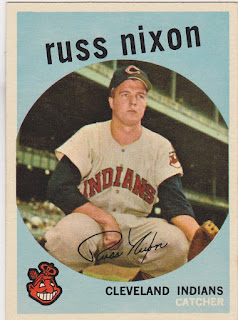 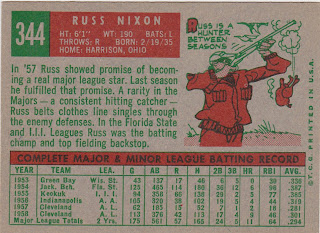 His best season was 1958 when he appeared in 113 games for Cleveland and batted .301 with nine homers and 46 RBI. After a less productive 1959 and a slow first half in 1960 he was shipped to the Red Sox. That was the second time he'd been traded to the Sox that year. A spring training deal fell through when Sammy White balked at reporting to Cleveland. Nixon was returned to Cleveland after a few Red Sox appearances in spring games. Finally a Red Sox he was the catcher on Sunday October 1, 1961 when Roger Maris hit and broke Babe Ruth's single season home run record with his 61st homer, the well known shot off Tracy Stallard into the right-field stands.

Nixon appeared in 906 games over all or parts of 12 seasons, and with a career .268 average. One odd note....he holds the record for most games played without ever stealing a base. After retiring as a player he began a long career as a coach and manager at both the minor and major league levels. He had two whirls at the managerial reins in the bigs, with the Reds and Braves between 1982 and 1990. His clubs were not able to do better than 6th place.

He managed in the Astros' farm system into 2005 and then joined Nolan Ryan in the Rangers front office. He's no longer listed on their webpage.

The light blue frame isn't among the more commonly seen in this set. The tall Yankee Stadium grandstands loom over his shoulder in this one.