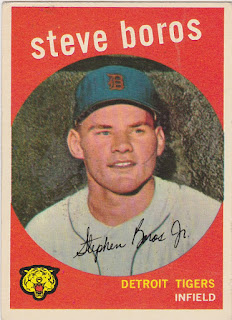 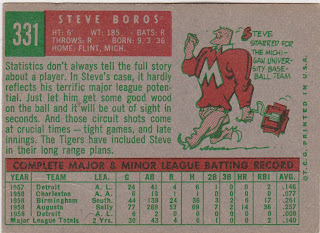 Fresh faced Steve Boros had only played parts of two seasons when this card was issued. After a collegiate career at Michigan he'd signed with the Tigers in 1957 and as a bonus baby' he saw immediate big league action. He got into a couple of dozen games and then got some extensive minor league experience from 1958 through 1960. His '59 and '60 seasons were very impressive.

In 1961 he took over the Tigers' third base job and held it for two seasons with mixed results. Traded to the Cubs for 1963 and the Reds for 1964 he failed to impress and was back in the minors in 1965. He finally hung up his spikes after the 1969 season.

After his playing days Boros began a long career in the ranks of coaches and managing. He worked for the Royals, A's and Padres in the minors and the big league dugouts. He developed a reputation and a master of stats and an advocate of the stolen base. Neither of his stints as a major league manager saw him finish in the first division and so neither job lasted very long.

He moved in scouting and front office jobs until he finally left the game in 2004. He died just over two years ago. MLB.com has a nice obit and tribute to a baseball 'lifer' as well.

He was about 20 or 22 when this shot was taken. He looks like a high school kid.