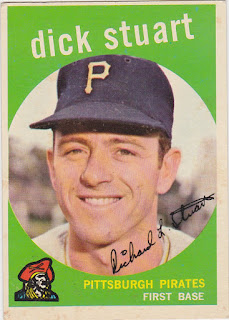 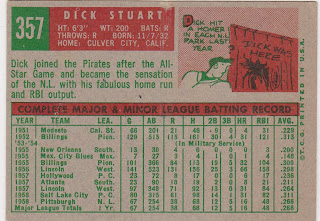 Dick Stuart was known for three things, his prodigious homers, his awful glove work, and his self confident quotes.

Homers: He had a 162-game average of 33 homers while playing all or parts of 10 seasons with the Pirates, Red Sox, Phils, Mets, Dodgers and Angels. In 1956 he had a 66 homer/171 RBI season (see note below) for Lincoln in the Western League.

Glove work: He holds the single season record for errors by a first baseman. He was given several nicknames based on his grace-less infield play including Dr. Strangeglove and the Man with the Iron Glove.


"If the pitching was better, I would have hit 90 home runs. I had to chase a lot of bad balls to get those 66 homers."

"I know I'm the world's worst fielder, but who gets paid for fielding? There isn't a great fielder in baseball getting the kind of dough I get paid for hitting."

"Isn't it odd? A guy bats .301 and has 35 homers. Then everybody starts to tell him what a good fielder he has become."

"One night in Pittsburgh, thirty-thousand fans gave me a standing ovation when I caught a hot dog wrapper on the fly."

All that, and he looks like my cousin Joe. There is a fun blog entry about Stuart right here. Worth the read.

Look, it's Valentine's Day evening as I type this. If I don't stop and pay attention to my wife I might need to start a new blog called The Divorced Collector.


EDIT: As was pointed out in the comments the card lists Stuart's RBI total in the minors in 1956 as 158. I got the 171 figure from the blog I linked to in the last paragraph. I have done some digging and found a wonderful page put together on the Lincoln Chiefs' 1956 Western League season. It's part of the Nebraska Baseball History website which I had completely forgotten about. I had browsed that site in the past since I have an interest in Nebraska and it's sports history. It credits Stuart with 158 RBI. I bow to the folks at Topps and stand corrected.

There is even this picture of a Stuart promotional trading card. 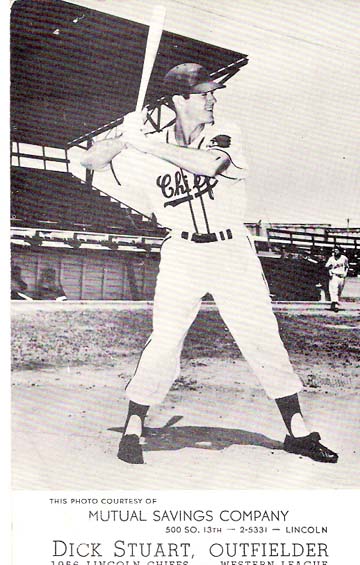 Posted by Commishbob at 4:00 AM