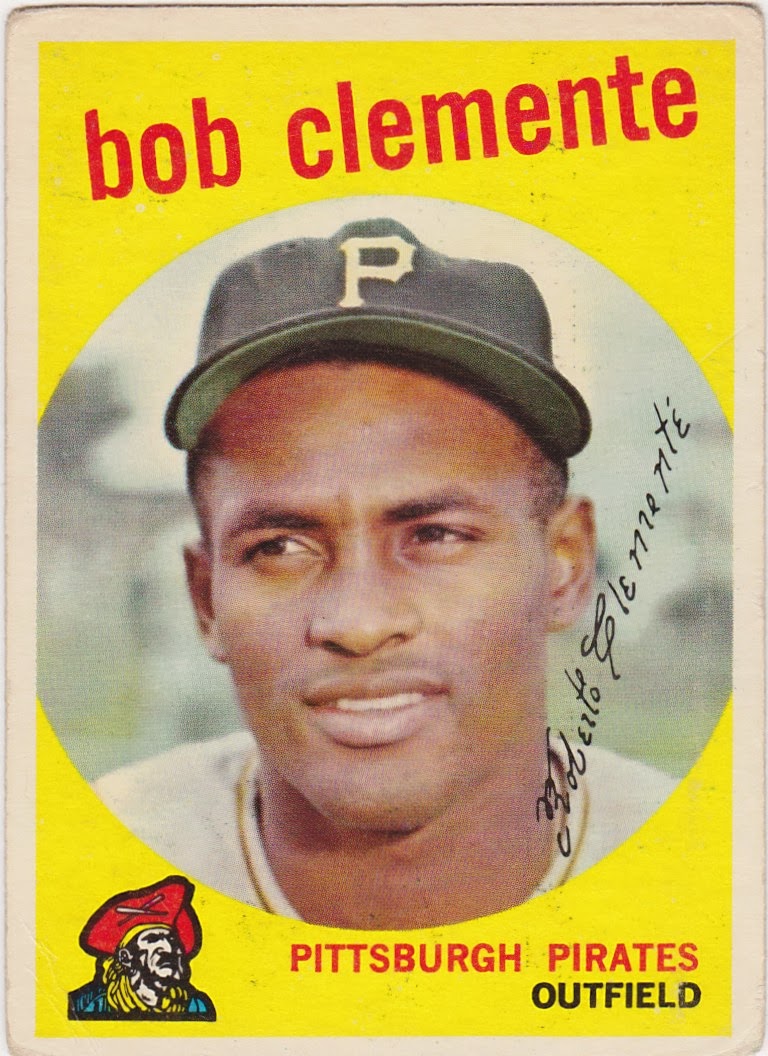 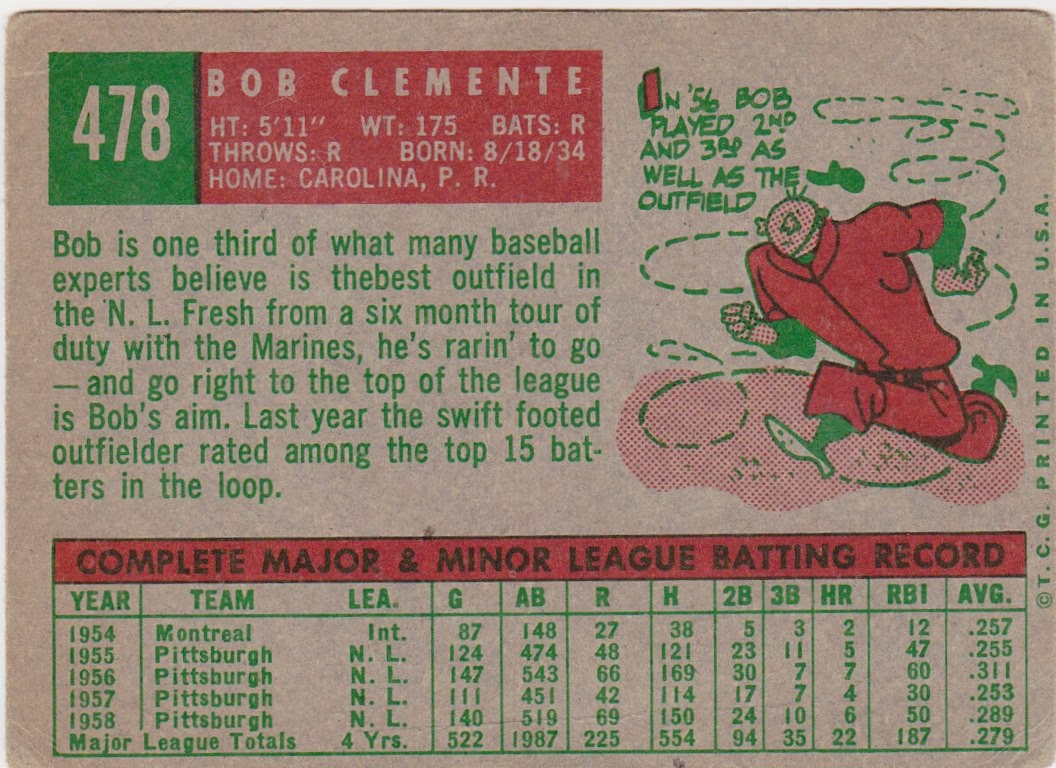 This is the last card to be posted from my 1959 Topps set. And this Roberto Clemente is one of my favorites. It doesn't show him an any sort of action pose which might reflect his skills but maybe more fittingly it's a portrait that has him with a half-smile focused off-camera. It's in 'fair' condition at best but given what they go for I think I'll pass up a chance to upgrade it. Hard to say where the shot was taken. Many Pirate cards have pictures from Seals Stadium in San Francisco but I get a vague 'L.A. Memorial Coliseum vibe' with this one.

You may have noticed that the card shows Roberto Clemente's first name as 'Bob'. I've always referred to as 'Roberto' so I'll go against my 'use what the card uses' convention and call him 'Roberto' here. I know Bob Prince called him 'Bobby' but... Bob Prince, well.... the less said the better. I understand that early in his career he was frequently referred to as 'Bob' but I have read that he didn't like it.

Just about anything I can say about the career and life of Roberto Clemente has been said in many places already by far, far better writers than me. Here are just a few highlights and a few memories of him.

I'm not sure what else there is to say after reading that list. I won't try to sing Clemente's praises but rather I'll recall my three most powerful memories of him.

In the summer I moved to Houston I saw the Pirates in the Astrodome a few times. One night (and I can't find the exact game) Clemente grabbed a fly with a runner on second and threw the ball on an absolute rope to third to keep the runner from moving up. Sounds routine but to see that throw and hear the crowd buzz, well, you knew that Clemente was just special.

Next is a catch he made in 1969 at Shea Stadium. In a game that was to be the only no-hitter I've ever witnessed in person he went full speed across the right-field line as he grabbed a shot by the Met's Wayne Garrett in the 6th inning. I remember him hitting the railing along the stands after the catch.

And finally I remember how he just whipped the Orioles in the 1971 World Series. I was so happy when the O's came back to tie the Series up in Game Six in Baltimore. I figured my Birds had it won with ace Mike Cuellar starting on Sunday at home. But when Clemente homered to put the Bucs ahead I got a bad feeling that he was destined to have another World Series ring. And I was right.

Here is his Hall of Fame bio:


Roberto Clemente Walker's pride and humanitarianism won him universal admiration. Despite an unorthodox batting style, the Pirates great won four batting crowns and amassed 3,000 hits. He was equally brilliant in right field, where he displayed a precise and powerful arm. Clemente earned National League MVP honors in 1966, but achieved his greatest fame in the 1971 World Series, in which he batted .414. Tragically, Clemente's life ended at age 38 -- the victim of a plane crash while flying relief supplies to Nicaraguan earthquake victims.

Some other Clemente related links of interest:
Some Clemente pics from Corbis' Clemente page: 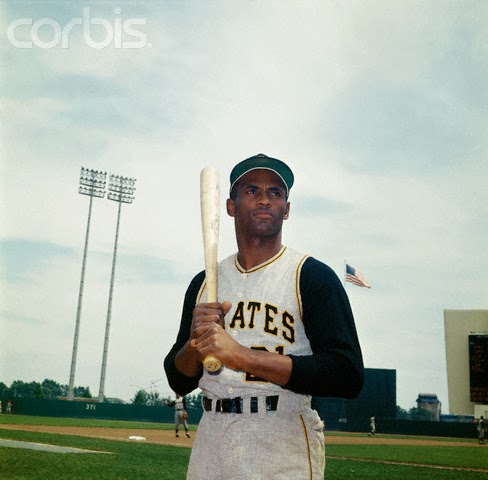 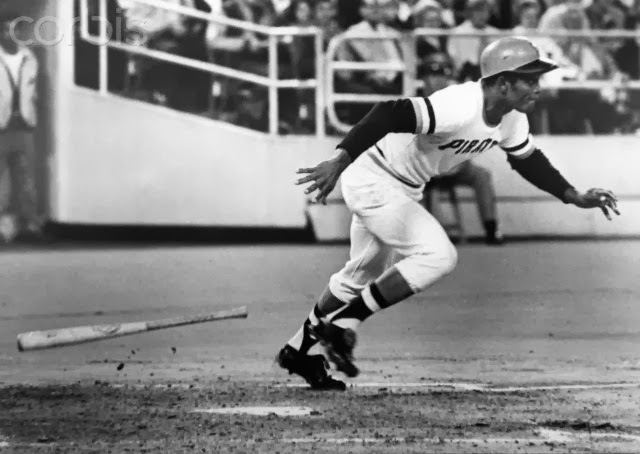 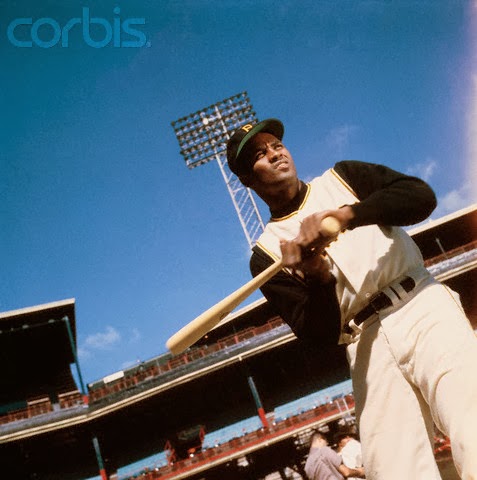 That's the last card, but not the last post on this blog. I'll have a wrap-up tomorrow and maybe a few things brewing down the road. As always, thanks for reading!
Posted by Commishbob at 7:11 AM